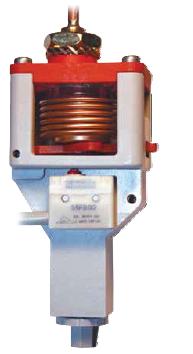 From pharmaceutical to oil and petrochemical industries and more, process control applications rely in large part on the well-known physical variables of temperature and pressure. To ensure that a chemical batch doesn’t exceed a certain set point, accuracy and reliability are key. Important components in these applications include pressure and temperature switches, which can be mechanically set to switch an electrical circuit and activate a process upon achieving a specific pressure level or temperature.

Background
Today, there exists a broad range of sensors for temperature and pressure control in process automation applications. In a large range of situations, however, the simplest solution is a pressure or temperature switch that activates power directly, without the need for an interconnected controller or electronics circuit. This simple arrangement proves to be not only easy to use, but also a cost-effective solution.
While pressure or temperature switches deliver the advantage of simplicity, good resistance to electromagnetic disturbances and temperature, they have some disadvantages related to the mechanical design. In its latest switch design, Microprecision addressed two of these limitations. 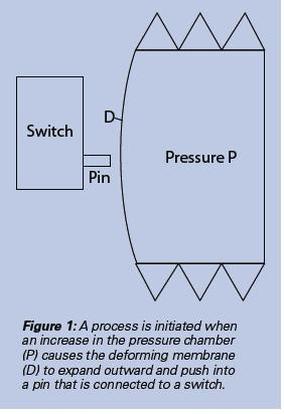 Measurement principles
A mechanical switch is activated through deflection of a flexible membrane that separates regions of different pressure. The deformation of the membrane (D) is dependent on the difference in pressure between its two faces. The reference face can be open to the atmosphere to measure gauge pressure. In order to measure differential pressure the two sides are open to the two pressure sources. In the case where one side is open to a sealed volume with fixed reference pressure, absolute pressure can be measured. Temperature measurement can be reduced to a pressure measurement if the temperature is guided to a sealed enclosure and is used to increase the temperature of the enclosed gas. As described by the universal gas law, pressure is proportional to the temperature of a specific gas. In the cases of both pressure and temperature, the deforming membrane (D) is placed in close proximity to the pin of a regular electrical switch. When the pressure or temperature increases, it causes the membrane to expand outward so that it pushes into the pin, which is connected to the switch. Once the actuating point is reached, the switch commutes from its ON1 position to its ON2 position, causing the specified process to initiate. 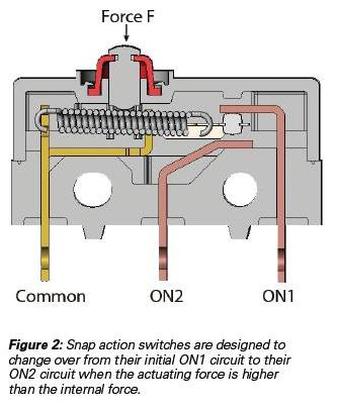 Switch Characteristics
The most commonly used switches are snap action switches in which the change over movement is initiated through an internal spring loaded pole. (Fig. 2) An actuating force is applied on the plunger and gets transmitted to act on the pole. For activation to occur, the actuating force has to be higher than the internal force, supplied by the spring. In a perfect world, the switch would instantaneously change over from its ON1 circuit to its ON2 circuit, once it reaches this actuating position Pa. In reality, however, mechanical switches are not ideal switches. Certain limiting factors of mechanical switches affect the final pressure switch accuracy. To understand the limitations of switch characteristics on the final pressure switch accuracy, one must first understand two important limiting factors of mechanical switches: dead zone passing and hysteresis or differential movement.

Dead zone passing
In most process applications, the temperature/pressure build-up is a slow process, causing the switch to move slowly from its initial position (Pr) to its actuating position (Pa) and on to its final position (Pfc) (Fig. 3). The same is true as the temperature/pressure gradually decreases causing the switch to move slowly back towards its initial position. From the time when circuit 1 is opened (Pa) to the point where the actuating force builds up enough to close circuit 2 (Pa2’), the switch is in a transition zone, also known as a dead zone. To put an end to this dead zone and in turn, activate a process, the actuating force has to increase to the point where it will securely close circuit 2 (ON2). The distance the pin has to travel, starting from the actuating position Pa up to a secured Pa2’ position typically exceeds 10 um for small V4 size switches. Depending on the mechanical construction of the snap action pressure switch, this may represent an important pressure range in which no secure switching can be guaranteed and both electrical circuits remain open.

Switch Differential Movement (Hysteresis)
As the pressure/temperature in the chamber decreases, the actuating force decreases as well, and at a certain point Pdr is no longer higher than the internal force of the spring. When this occurs, the switch changes over again. It opens circuit 2 (Pdr), passes the dead zone and closes circuit 1 (Pdr2’). Ideally, as the temperature/pressure decreases, the switch should open/close the circuits at the same point as they were opened/closed as the temperature/pressure increased. Real world switches, however, do not move the same way through the switching cycle under decreasing pressure as they do under increasing pressure. Progressing back from its final position (Pfc) through decreasing pressure, the switch does not commute back at the actuating position (Pa) but instead, at a later release position (Pdr2’). This distance between the actuating point and the release point is called differential movement, or hysteresis, which is another limiting factor that affects precise pressure switching. This differential movement is critical in detecting small pressure changes. To maintain optimal switching accuracy for process applications, a switch with low hysteresis should be selected. However, many inexpensive, small V4 switches—which are popular due to their compact footprint and low price tag—often have a large hysteresis.  Typical values of 0.15mm or even more for less expensive products from many emerging markets are common for these small switches.

Improvements
To minimize the limiting factors of mechanical switches and meet the requests of numerous pressure switch manufacturers that required a more precise pressure switch, Microprecision Electronics redesigned its V4 switch range (MP500) and modified its manufacturing operations to reduce dead zone passing from the typical measurement of 10 um to 1um. Additionally, with Microprecision’s superior V4 switches, it is possible to reach consistent differential movements below 0.05mm—a three times improvement over the typical value of 0.15mm. While limiting factors still affect mechanical switching, reduced dead zone passing and switch differential movement can increase accuracy for process applications that rely on the physical variables of temperature and pressure. 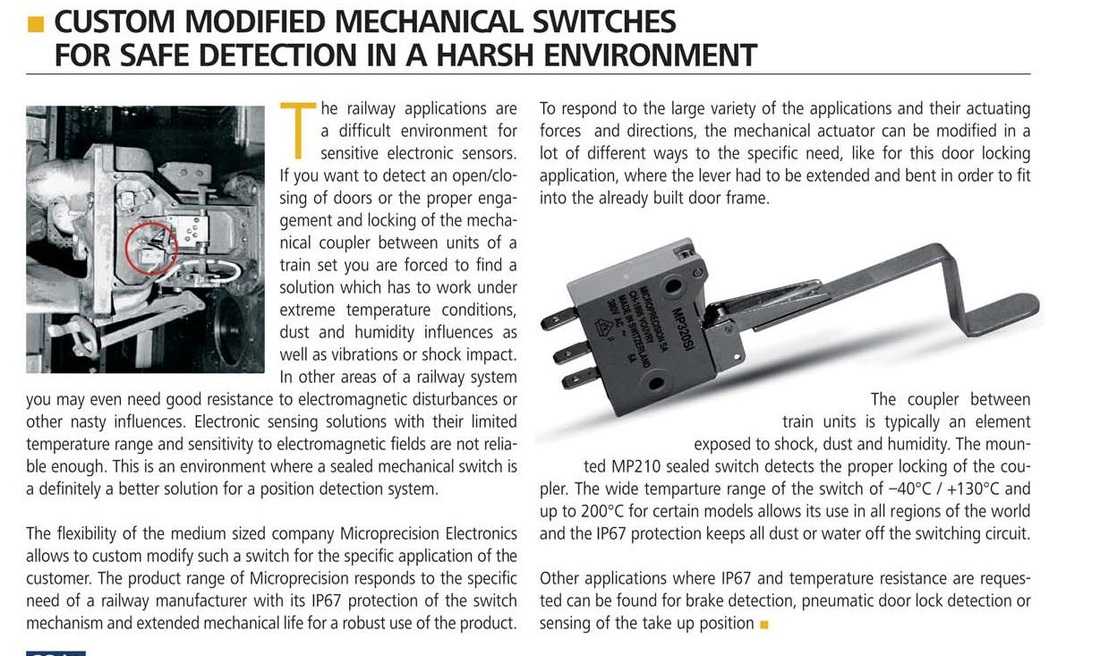